100% ownership of all titles, excluding;

The Tennant Creek Mineral Field is situated approximately 500km North of Alice Springs on the Stuart Highway, the main road link between Adelaide and Darwin. Important infrastructure running through Tennant Creek includes the Adelaide-Darwin railway and gas pipeline. Tennant Creek has a population of approximately 3,500 and is the main service Centre of the Barkly Tablelands region. 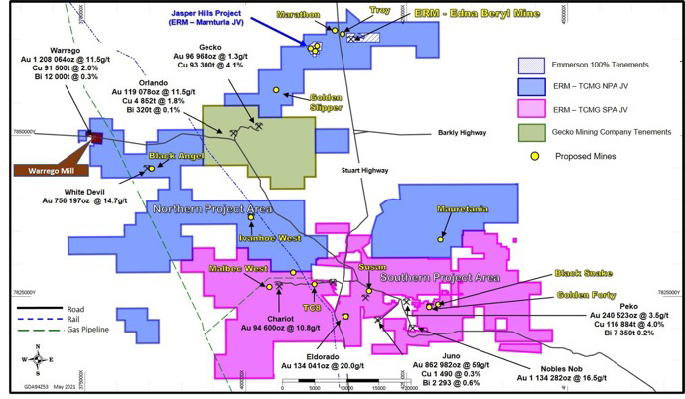 Figure 1: The tenement package is geographically divided into the Northern (NPA) and Southern Project Area (SPA).

The Paleoproterozoic Tennant Creek province comprises of a poly-deformed flysch sequence (Warramunga Formation) intruded by syn-orogenic granite, granodiorite and felsic porphyries. A group of silicic volcanics and volcaniclastics (Flynn Subgroup) were deposited, but not deformed, during the Barramundi Orogeny, then subsequently deformed and intruded by anorogenic silicic intrusives and lamprophyres.

Mineralisation occurs in small-to-medium sized lenses within sheared ironstone. Based on historical data, some of the deposits averaged life-of-mine grades of 15-20g/t gold and 2-4% copper. Examples include the classic Juno and Nobles Nob deposits with grades of more than 50-60g/t gold.

The sulphide content of these primary deposits rarely exceeds 10% and common ore minerals include chalcopyrite, native gold, cobaltite, and bismuthinite. The gold-dominant oxide and primary ores are generally free-milling, which can result in high recoveries (up to 98%) being achieved.

Oxidation extends up to 120 metres below the surface and, within the ironstones, results in a hematite-goethite-quartz-clay assemblage. The copper mineralisation is typically leached and depleted while the gold mineralisation can be spectacularly upgraded.

The key to reinvigorating exploration in the TCMF is the application of new concepts and new technologies.

It can be seen in Figure 2 that discovery (and subsequent production) of new deposits is strongly tied to the application of new concepts and technology. Historically this was the application of magnetic geophysics – where bonanza discovery (and production) closely followed the BMR aeromagnetic survey in 1955, then further discoveries followed on from the more detailed AGSO survey in 1987. 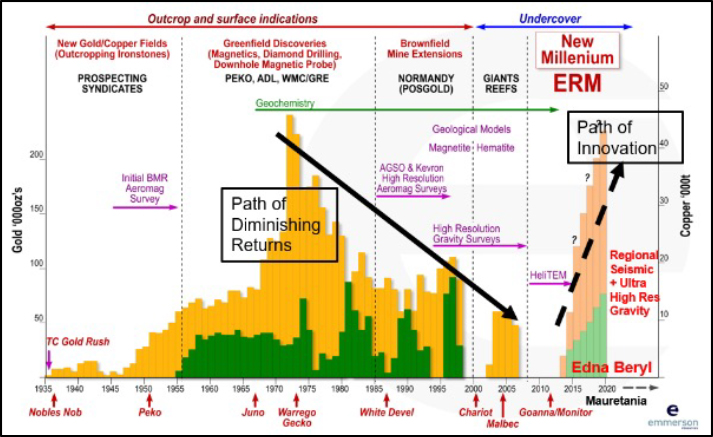 Figure 2:  Timeline of exploration discoveries and techniques in the TCMF Emmerson is the first company since 2007 to apply new proprietary exploration techniques and concepts, after consolidating a dominant 1,706km² tenement package.

Emmerson is the first company since 2008 to apply new proprietary exploration techniques and concepts, after consolidating a dominant 1,706km² tenement package.  Emmerson believes that the decline in discovery rates as suggested in the chart (above) does not reflect metal depletion but rather is a direct consequence of the lack of fresh concepts and technologies.  Emmerson maintains the view that only half of the deposits in the TCMF have been discovered, based upon scientific modelling of deposit populations according to the Zipf Law of Natural populations (Figure 3).

To date Emmerson has discovered high grade gold at Edna Beryl and Mauretania, and high-grade copper and gold at Goanna-Monitor. These are the first discoveries in this province for over a decade and testament to the successful application of new concepts and technologies. The defining characteristics of this new generation of discoveries includes an association with hematite ironstones, that were largely “blind” to previous historical exploration.

The Mauretania deposit is a green-fields discovery by Emmerson in 2015, based upon similar geology and targeting criteria to previous discoveries at Edna Beryl and Goanna.  The Mauretania deposit is similar in composition to the bonanza-grade, Nobles Nob Mine which produced +1.1Moz of gold at an average grade of 17.3g/t Au.  Mauretania is hosted within hematite-magnetite ironstone and features high-grade gold along with silver, copper, and bismuth (Figure 4 and Figure 5). 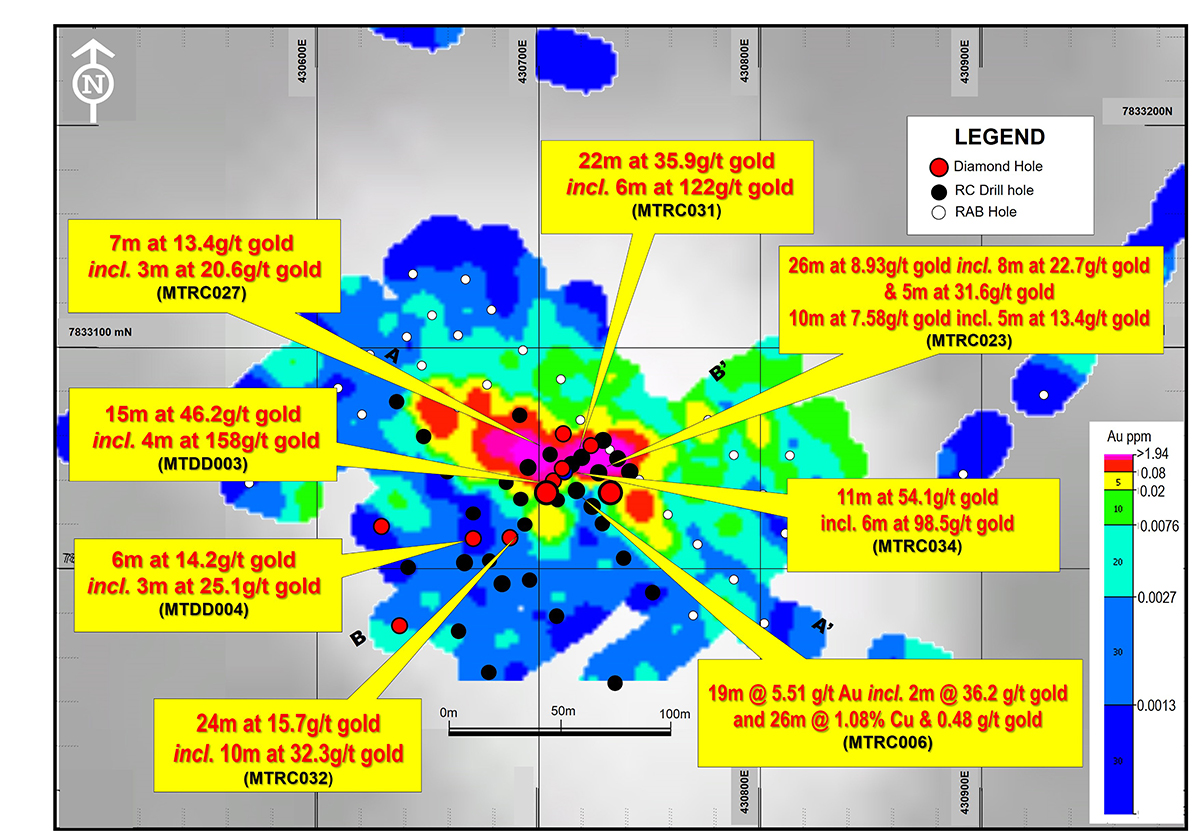 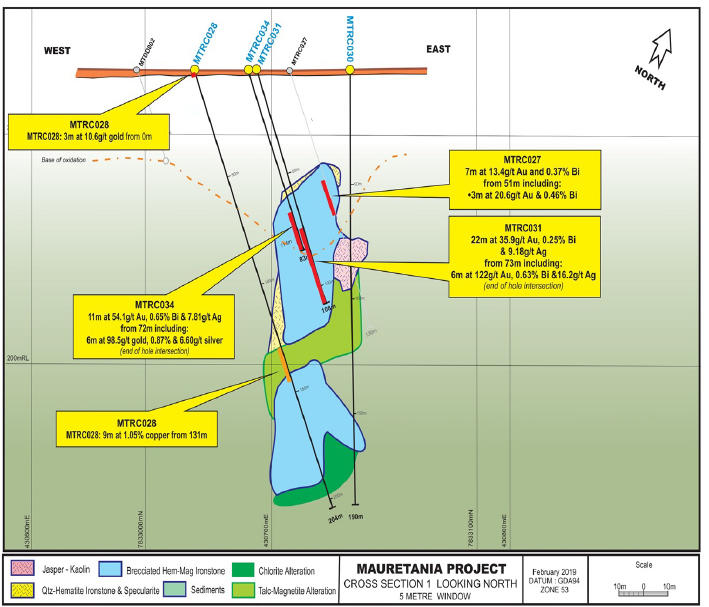 The latest results from Mauretania are significant in terms of intersecting the underlying source of the upper oxide gold mineralisation. This expands the potential for adding to the existing mineralisation

The gold and copper mineralisation remain open to the northwest and at depth, with the typical metal zonation in these styles of deposits consisting of primary gold beneath or lateral to the copper. 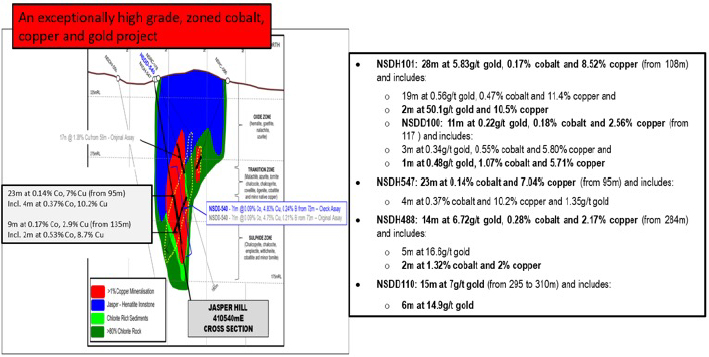 While Jasper Hills was discovered back in 1930’s, it received little attention at the time due to a combination of the low cobalt, copper and gold prices, plus other priorities such as development of the nearby North Star mine. Following the decommissioning of North Star, the entire area was declared a Restricted Work Area that contained a number of sacred sites, and thus has been off limits to exploration ever since.

Mineralisation at Jasper Hills is typically associated with the footwall or core of the ironstones, whilst the oxide zone consists of malachite and lesser azurite.  The transition zone includes these plus bornite, chalcocite and native copper, extending down some 200m below the surface to encompass the sulphide zone of mainly chalcopyrite.  The high-grade cobalt zone transgresses the copper and consists of mainly cobaltite in association with chalcopyrite and digenite.  Historic metallurgical testing of these ores in the 1990’s produced a high-grade copper and cobalt concentrate, with a 20kg sample grading 3.6% copper and 0.16% cobalt (1990 Optimet Laboratories). 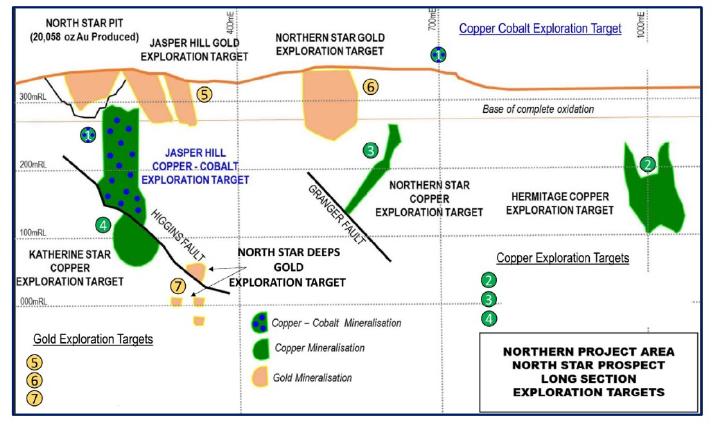 Figure 7: Schematic long section highlighting the potential of the project area. Note that these exploration targets are conceptual in nature and that there has been insufficient exploration to estimate a Mineral Resource (ASX: 06 August 2020)

In late 2020 Emmerson reached a landmark agreement with the Traditional Owners of the Jasper Hills – North Star area. This Native Title Agreement provides an equity interest for the custodians of the land, employment opportunities plus safeguards in relation to the sacred sites.

A new geological model for Jasper Hills indicates potential for multiple zones of high-grade gold, copper, and cobalt mineralisation – in an area that has seen no modern exploration.  The indicative cobalt grades at Jasper Hills along with the combination of copper and gold provides potential for high value ore.

More recent exploration between 1996 and 2000 by Giants Reef Mining outlined additional high-grade gold mineralisation below the historic workings of the Edna Beryl East Mine.

The high-grade gold mineralisation at Edna Beryl is very typical of the TCMF, however this style of predominantly hematite associated gold has gone virtually undetected by previous explorers.

The Edna Beryl Mine is currently being mined under a Tribute Agreement between Emmerson and the Edna Beryl Mining Company (EBMC) (now owned by Territory). Emmerson retains 100% ownership of the mineral lease and receives 12% of all gold produced. 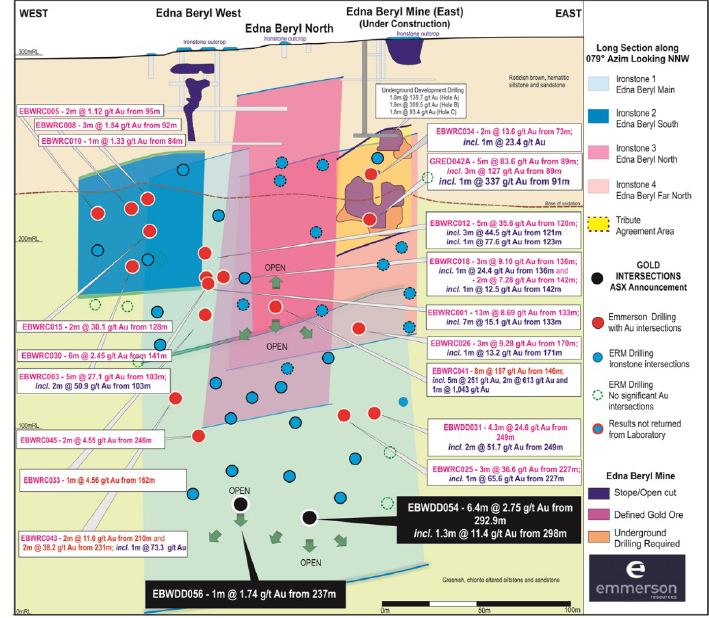 Opening of Emmerson’s small mine at Edna Beryl with the Traditional Owners, Northern Territory Government & Emmerson Resources Board

The Southern Project Area (SPA) tenements are 100% owned by Emmerson and includes the highly prospective Chariot Mine which forms part of the JV with TCMG.

The Chariot deposit is located approximately 10 km west of the Tennant Creek town site.  Chariot has been mined by both open cut and underground methods.  The Chariot Mine operated between 2003-2005, producing 253,734t @ 10.9g/t gold for 86,326oz gold. The mine was closed in 2005 due to Giants Reef Mining (the then mine owner) entering administration.

The mineralisation at Chariot is gold dominant, with minor to subordinate copper and bismuth hosted by the magnetite-hematite-chlorite rock. The mineralisation is interpreted to be structurally controlled via short-range structures, lenses, and shoots. These lenses have dimensions ranging from 5 m to 50 m along strike and 10 m to 100 m down dip. The weathering profile over the Chariot mineralisation is extensive to depths of over 100 m. 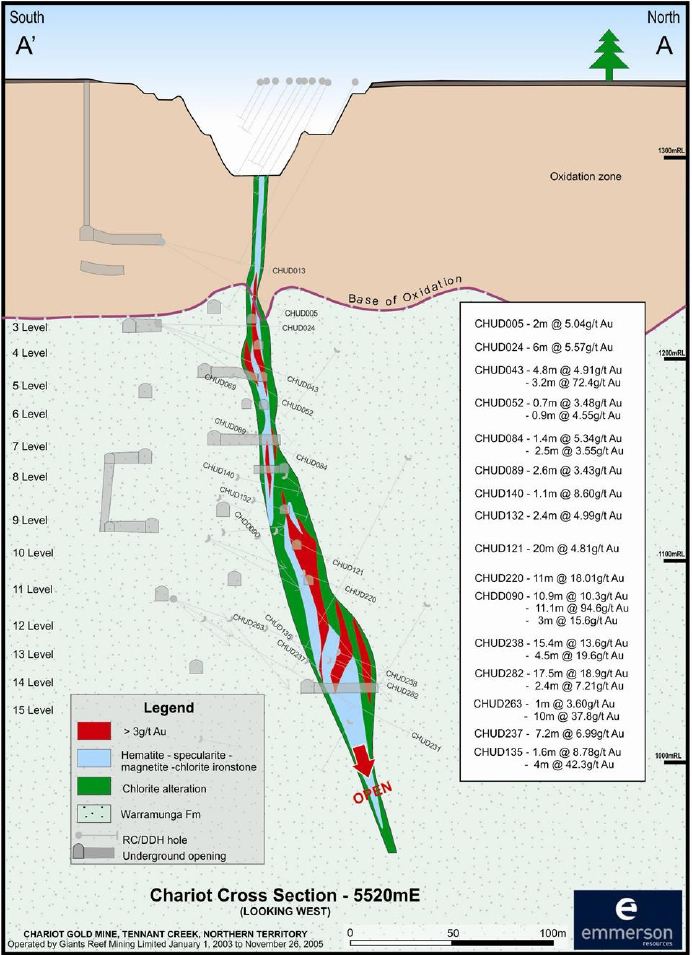 The Chariot MRE has an approximate strike length of 160m and width of up to 30m within ironstone and alteration units. The reported MRE comprises 2013 historical open pit and underground resource and a 2021 update consisting of an underground resource - both estimated by Optiro Pty Ltd (Figure 11).