In 2016, Emmerson entered into a Joint Venture with Aurelia Metals (ASX:AMI), over their Kadungle project in NSW. Historical drilling by Aurelia indicated potential for both shallow gold-silver and deeper, copper-gold mineralisation – within a region that Emmerson considered highly prospective for multiple deposits of porphyry copper and gold. Emmerson has subsequently earnt an 80% interest through meeting the terms of the earn-in expenditures.

The Kadungle project is situated adjacent to Emmerson’s Fifield project and consolidates a large package of ground within the prospective Lachlan Transfer Zone.

The oldest rocks outcropping in the vicinity of Kadungle and Fifield are the Ordovician to Early Silurian Girilambone Group. These rocks are deformed basement consisting of quartzite, phyllite and schist. The Girilambone Group outcrops in the extreme west of the Exploration Lease (EL) 6226 and EL8646, where several strong magnetic, platinum bearing, ultramafic complexes intrude (Figure 1).

East of Tullamore and the Gobondery Granite, the basement is less deformed, separated by the north-south Fifield-Steetone fault system. Further to the east, the basement comprises Early Ordovician Nelungaloo Volcanics and the overlying, more widespread Late Ordovician, trachyandesitic Goonumbla Volcanics. 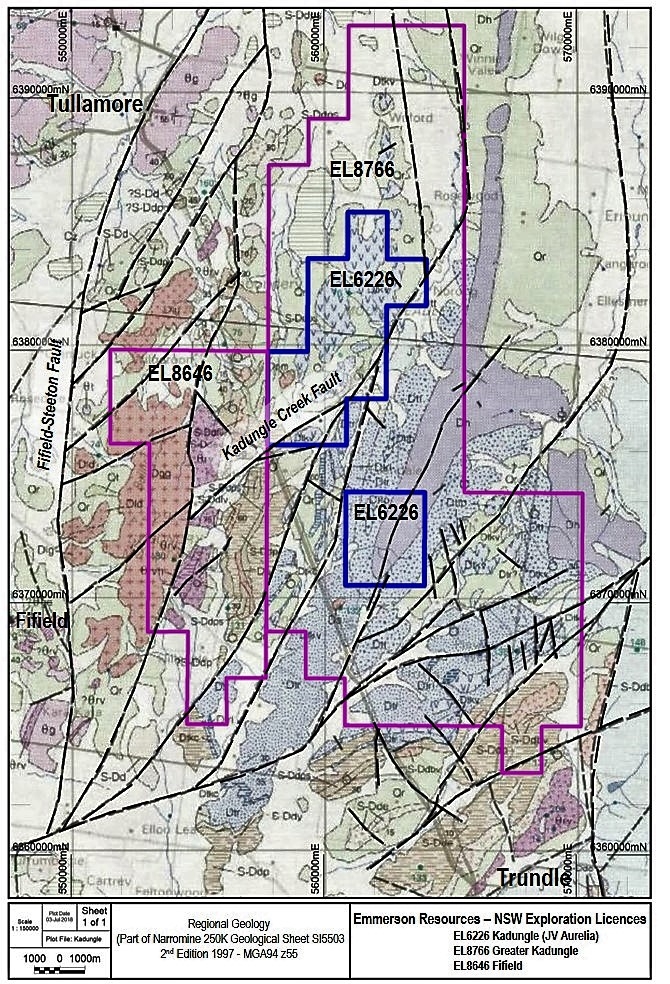 EL6226 covers part of the Siluro-Devonian Tullamore Syncline. The license area is dominated by the Devonian age, Kadungle Volcanics. Unconformably overlying this sequence are Late Devonian, quartz rich sandstones of the Hervey Group. The Raggatt Volcanics form the basement to the project area and are interpreted as rifted equivalents to the Goonumbla Volcanics that host the North Parkes porphyry copper deposits.

Some of the historical drilling at the Mount Leadley prospect indicates potential for both shallow epithermal gold-silver and deeper, porphyry style copper-gold. With some of the better intersections being:

Recent drilling by Emmerson intersected multiple zones of alteration and mineralization including: 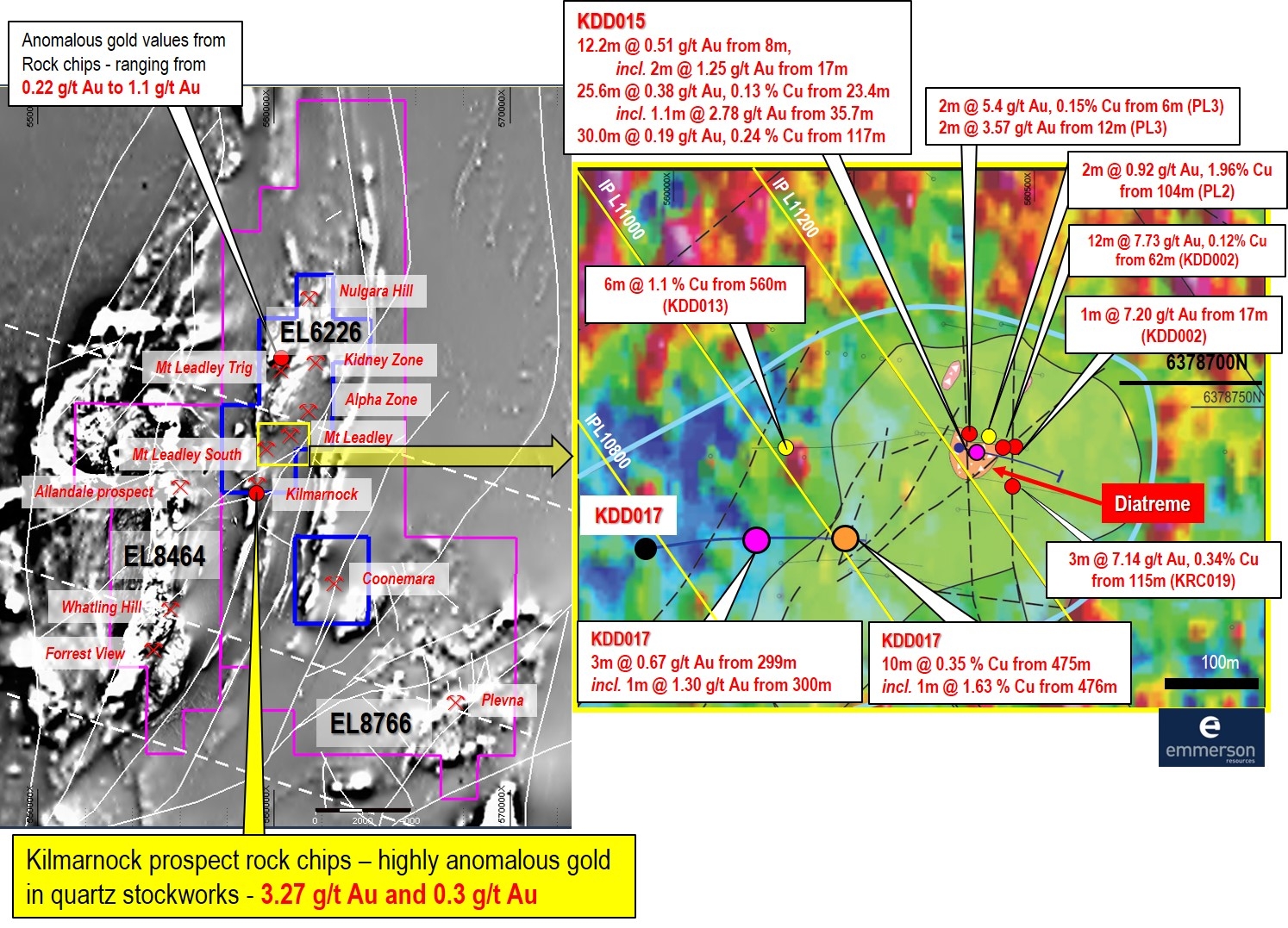 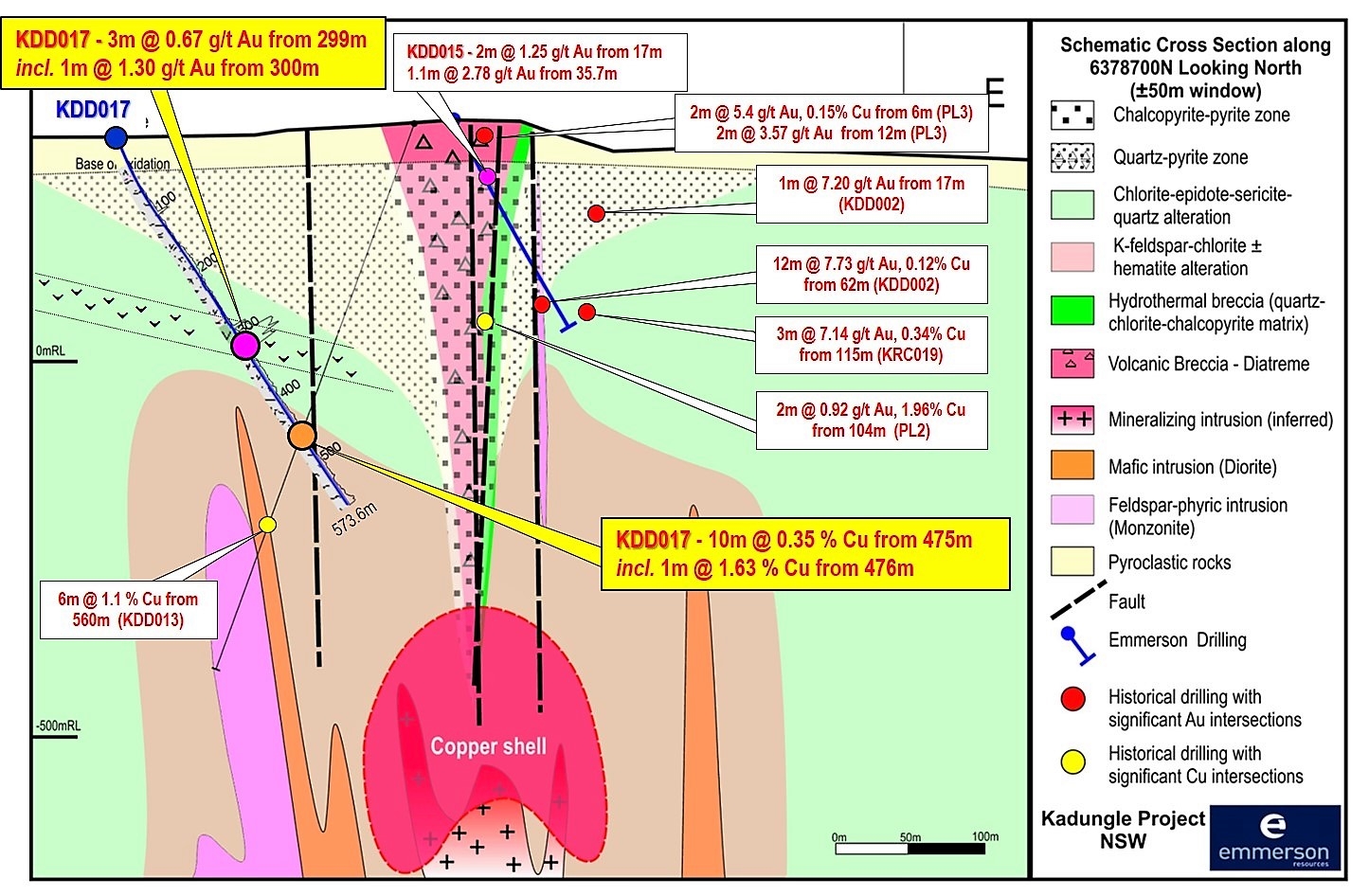 Cross section of the interpreted geology from Emmerson’s recent drilling. Note the extensive chalcopyrite-pyrite and quartz-pyrite zones plus hydrothermal breccia at the margin of the volcanic breccia/diatreme. For reference, the red dots are historic intersections projected onto this section. KADD015 and KDD017 is shown with significant gold and copper intersections.

The second phase of exploration was completed in February 2018 and since then, further sampling, mapping and geoscientific studies continue. With the aim to pinpoint the better copper and gold mineralisation, typically associated with the core of the porphyry system (figure 3).

Interestingly, ongoing analysis of the alteration (green rock studies) at the University of Tasmania has confirmed the size potential of the Kadungle porphyry system but suggests that drilling to date has only tested the periphery of the mineralisation.